I don't have much to write. I have phases, sometimes, where my thoughts almost spill over themselves in an effort to be expressed. Then, sometimes, they fly a mile a minute through my mind, but elude my grasp and refuse to escape and be concretely written or typed.
So why force it? Here are some pictures instead. (Supposedly these are worth a thousand words, anyways.) 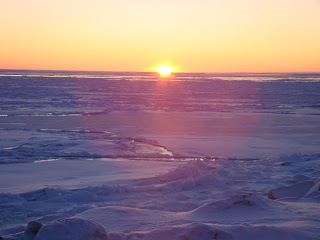 The ocean is finally completely frozen over. It was a fascinating process to watch and now it's beautiful and desolate, like a snowy desert. 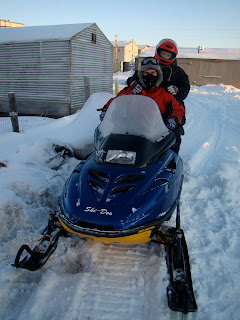 The best part of heavy snowfall is that we can finally use the snow machines! 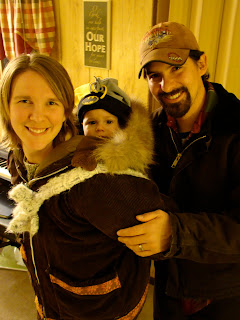 This is James, Amy, and their little guy Justice. One of the best parts of being in Nome has been getting to know them better! I work with James at the Children's Home. He is also an artist (the Anchorage Museum of Art just bought one of his paintings!) and Amy is one of those people who is so incredibly artsy and creative, that just being near her inspires you to try and create something. :) Even beyond that, though, they're a blast to be with! 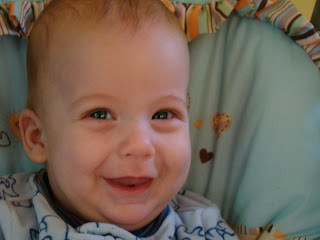 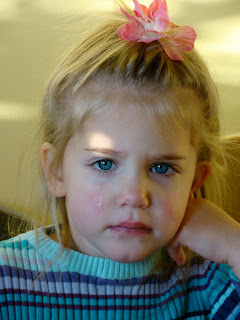 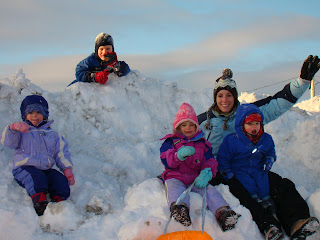 We had fun sled riding and fort digging with piles of snow near our house. 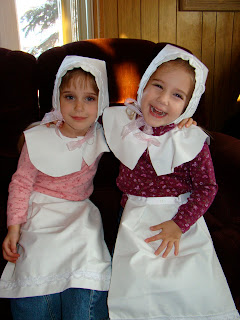 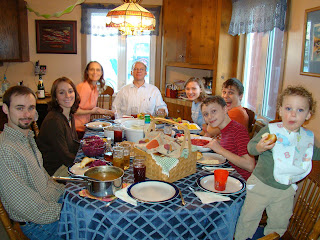 We had a wonderful time with the Fiskeaux's for Thanksgiving dinner! 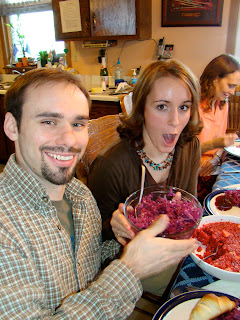 Thanksgiving would NOT be Thanksgiving without Grandma's red cabbage and delicious lentils! I woke up Thursday morning and it occured to me that I'd have to be the one to make these dishes this year because mom's not here. :) So I rushed to the store and gritted while I paid $15.00 for two tiny cabbages... but it was worth it. Nate, Carlee and I felt like we were at Grandma's house when we tasted the traditional Thanksgiving food. 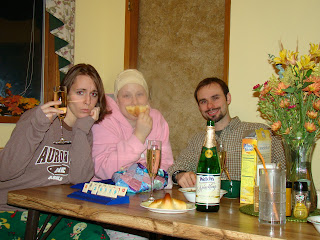 After the kids were in bed Nate came over and we played Rumikub, ate some leftovers and watched a movie. And of course, laughed and goofed off as only siblings can. We got quite a kick out of this picture... Carlee appears very phantomlike... HOW did she manage that?? When will the fashion police track down and interrogate me about my pajamas? And WHY is Nate acting normal when we all agreed to act crazy for this one??
(Questions that will, undoubtedly, remain a mystery.)
Posted by Dani at 6:02 PM 9 comments:

On a mountain I saw a tree one day,
Just a small sapling where a nut once lay.
And I paused to wonder as I saw that tree
What the years would do; what the tree would be.
The years will pass and the tree will grow, but
Every trial it's seen will eventually show.
For a tree can't hide what it's feelings are,
And for each new hardship it will bear a scar.
On the mountainside it will bear the brunt
Of the elements; it will tremble; grunt.
And tree stands firm, when the fierce winds blow,
But the barren trunk and the branches show
That time and wind have had their say
For they'll gnarl and twist in a painful way.
The leaves will fade and curl and drop
When the last warm rays of Summer stop,
For the tree can't show any beauty there
When the breeze it feels isn't warm calm air.
I hike the trail oft' to see that tree
For when I see it's progress I think of me.
My life is gusted by winds over time,
And the choosing of the winds that I feel isn't mine.
I can not choose if they'll warm or chill me,
Can't know if the world will love or kill me
But by the grace of God I will blossom still
When the warmth of friends turns to icy-chill;
When the winds of time try to shake and twist me-
When rain and tears erode the ground about me-
And though wounds may come, may the scars be few
For the keeper of my tree is a lonely Jew.
~DCS
Posted by Dani at 1:10 PM 4 comments:

Still sick.
Looking for clues revealing what sort of illness I might have.
Baffled. 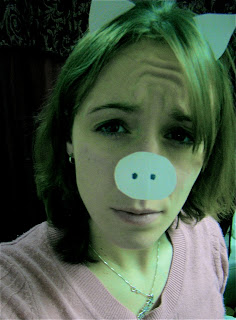 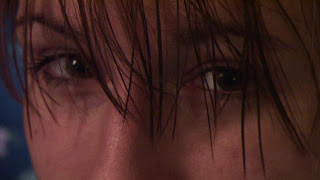 And so, in the name of frugality, I bravely let Carlee cut my hair. I couldn't pay the outrageous price for a trim in Nome, so Carlee agreed to do it and she did a very admirable job I must say! (Layering and EVERYTHING... not just a trim!) It took a long time, and it was punctuated with "Oops!", "Whoa...!", "Uh-Oh", and "Oh, no!". And there are a few jagged cuts. But, overall it's a credit to her ammeter skills. And it made for a fun evening laughing as sisters together. 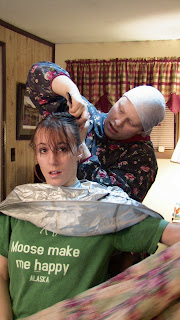 Okay, this is Carlee here... I just sabotaged her keyboard. I was walking through and she's complaining about how pale she looks. SHE looks pale? I don't even have eyebrows! I am humbly letting her post such a nasty picture of me, and SHE is complaining about her looks. A little sympathy here, please! Okay, I'm giving the keyboard back... HI to everyone on Dani's blog... thanks for praying for us! ~Carlee 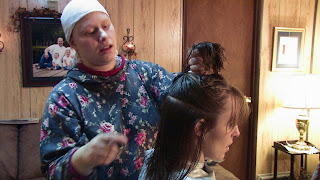 In other news, the Big Blizzard has arrived! It's been snowing for 4 days, and we've got 3-4 ft. of snow! This morning the truck below was blowing a plume of snow at least 30 ft. into the air to get it out of the road. Of course he would stop right as I snapped the picture. But it was pretty amazing. 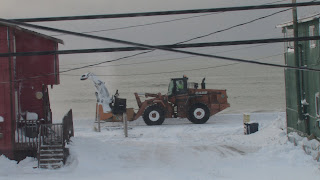 Time to start warming up the reindeer for their cross cultural flight? 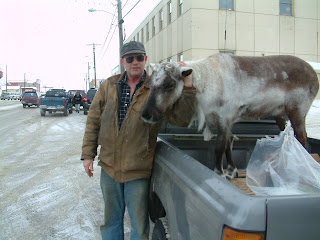 Warm wishes from snowy Nome! I miss you all very much.
Posted by Dani at 5:15 PM 1 comment:

The sick little house in the North

Or rather, "the sick little inhabitants of the little house in the North." It seems that nearly every family in town is being hit with a bug. Ours is no exception! We're all feeling sick other than Caleb and Carlee, and praise God we hope it stays that way. (The "other than Caleb and Carlee" part. They're the most vulnerable members of the family and I am SO grateful it hasn't hit them.) We've been feeling yucky for nearly two weeks now, though, and I think we're ready for it to be over.

Please pray that Carlee won't get it. She is starting to feel much stronger now that the chemo is out of her system. It would be tough for her to be knocked out again. There's also a large amount of H1N1 going around that could potentially be tough for her to deal with. She's still tired a lot of the time and still struggling with "chemo brain", which is a condition caused by the chemicals which blocks certain brain functions: specifically multi-tasking, remembering lists, things like that. We've made a few jokes about it, but recently Carlee found out that "chemo brain" is actually, possibly an irreversible condition. It was one thing to try to laugh it off when we thought it would end with the chemo treatments. A humerus, though sometimes frustrating season of life. It's quite another when you realize this could continue for the rest of her life. It's scary and overwhelming. I know she'd appreciate you joining in prayers with us that God would help her brain to resume normalcy and would wipe out the effects of her treatments to both her heart function and her brain.

Thanks for any and all prayers for my precious sis. She is such a trooper... so tough and sweet even when she's exhausted almost beyond endurance! The love of Christ and His beauty rests on her life and radiates BRIGHTLY to all who encounter her. I feel so blessed to live with her and see it in action on a daily basis. I often pray for God to help me to develop the resilient, beautiful spirit He's given my sister!
Posted by Dani at 1:04 AM 2 comments: 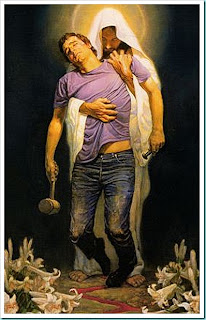 A Trip to Civilization

Okay, I exaggerate. Nome is civilized.
But still, I've missed things like Wal Mart a lot, and it was exciting to be Carlee's escort for her Herceptin treatment yesterday. It was only a one-nighter in Anchorage, but it was a fun flurry of shopping and bumming around the big city! Nathan was sweet to fill my usual shoes and watch the kids, and Carlee, Caleb and I had a wonderful, if busy, time. I loved seeing the mountains again in Anchorage. They are indescribable.

I've been enjoying some "for fun" reading at night before I turn off the light for bed. I haven't read a book just for fun in a very long time and it's kind of refreshing! It's "Anna and the King of Siam". I did now know that the romanticized story "The King and I" is actually based on a very true story... and it's a very moving one, too. I love the Rogers and Hammerstein version; have nearly all the songs memorized, absolutely adore Yule Brenner's kingly skills, and am reduced to sobs at the end of the movie EVERY TIME even though I know he's going to die! (I inherited my Grandma Oriti's love of theater!) The true story, though, is one of amazing courage and inspiration. Of a woman whose influence on the next generation of royalty led to the abolition of slavery in Siam. Not very romantic, perhaps, but unbelievably inspiring. An ordinary woman who suffered incredible hardships during her life, quietly changing the course of a nation through her influence. Wow.
Honestly, I feel almost envious that Anna had the chance to do what she did. There are very few people who get the opportunity to influence the royalty of a barbaric nation. I'm sure I'll never be called on to do something that the world would label "great". But I think of Mother Theresa's words, and am inspired and somehow comforted: "We can do no great things. Only small things with great love." I don't agree completely: we can do great things. (Anna did.) But I don't think we can do anything "great" unless it is done with love. And any tiny deed, done with love, becomes great in God's eyes. That includes diaper duty.

I guess, after knowing the true story, I should be indignant at Rogers and Hammerstein's dramatization of it. But this will probably always be one of my favorite musicals! 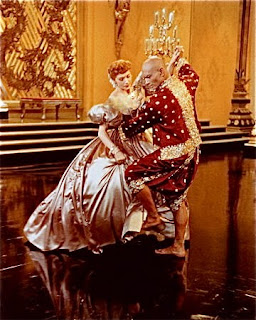 Dani
I am Danielle. Just another servant, friend, and daughter of the Most High God.

Until the whole world knows: